When music meets the movies

When music meets cinema, it's a match made in heaven! Many a musician has understood this and crossed over to Hollywood. Some have even taken on roles as singers, actors, directors and even producers and we've lined some of them up here for you.

The celebrated actor of Doctor House is also a pianist, guitarist and talented singer so much so that he's even been signed to a record label and goes on tour throughout Europe. As part of the group Band From TV, proceeds from their concerts are donated to various charities.

David Bowie, known also as David Jones to his close friends and family, had a love of cinema. His son Duncan, who also shares this love of cinema, is an award-winning director. Bowie can be found in several films like Merry Christmas Mr. Lawrence, The Man Who Fell to Earth and The Prestige in the film in which he plays Nicolas Tesla. In all, David Bowie starred in 27 films and even earned awards for his musical contributions.

The Fresh Prince of Bel Air has always been known for his creative versatility, including his rap! One of his most famous was for the single from the 1997 film Men In Black and the sequel Wild Wild West in 1999.

Thanks is due to director John Landis and actors Dan Aykroyd and Jim Belushi for the movie The Blues Brothers. Alongside the group, the film included a long list of famous musicians including Ray Charles an instrument salesman with incredible reflexes, John Lee Hooker as a street musician, Aretha Franklin a restaurant worker, Cab Calloway as a manager of an orphanage and James Brown as a pastor. There hasn't been a single film since that has regrouped so many talented and well-known artists!

The actress and celebrated muse of Woody Allen tried her hand at music and even had small success with the title "Relator"". Her voice can also be heard on the soundtrack of several films including Her from director Spike Jonze. Her love for karaoke is no secret either as she costars with Bill Murray in Lost In Translation!

The west coast rapper , whose real name is O'Shea Jackson, and to whom we owe the song "Check Yo Self" took a leap in front of the camera and stars in several TV roles and movies like 21 Jump Street. He's also a screenwriter, director and producer!

Director and friend of Quentin Tarantino, credit for the film series like Machete or Sin City are thanks to Rodriguez who also contributed his talents to the films' original soundtracks!

The American garnered fame as a kid thanks to his role on the TV show Mickey Mouse Club where he sang and danced alongside other household names like Ryan Gosling. After a stint with the famous boys band N'Sync, he went on to launch a globally successful solo career in the 2000s. Today, he's often seen just as much behind the camera as on stage!

The King had a well rounded Hollywood career. He played in over 27 films between 1960 and 1968! The classic hit "Jailhouse Rock" is amongst one of the many written to accompany him in his theatrical musings.

Know any other famous singers that have also leaped into acting? Don't hesitate to share with us in the comments below! 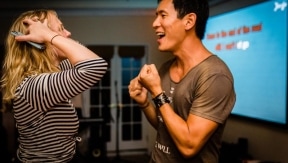